With the most important election of our lifetimes fast approaching, now is the time for voters of color to take the lead by electing proven social and environmental justice champions. CEJA Action is endorsing 14 candidates for State Assembly, State Senate and U.S. Congress – and a big YES vote on Propositions 15, 16, 17, 18, 21 and 23 to strengthen civil rights and reinvest billions in environmental justice communities across the state.

The COVID-19 pandemic and the resulting economic recession have pulled families and communities into a state of crisis. As we confront the triple crises of worsening wildfires as a result of climate change, a health pandemic, and recession – impacting low-income communities, and people of color, first and worst – the need for EJ champions is stronger than ever. We need to vote for true representatives who will stand with communities and demand environmental solutions that achieve racial, social and economic justice for all Californians.

CEJA Action is the only statewide, people of color-led alliance with deep expertise on environmental and climate justice issues faced by communities on the frontline of long-term pollution, systemic racism and regulatory negligence. We are the only alliance that builds the political power for environmental justice communities with strong infrastructure focused on mobilizing voters on candidate races. Our Voter Guide reflects our Alliance’s deep-rooted community organizing – and we’ve endorsed candidates who will advance critical policies to improve the health and quality of life for communities of color.

This guide is for YOU: a California voter who is impacted by and cares deeply about racial, economic and environmental injustice and believes that those living in environmental justice communities must shape the solutions we need.

Download the 2020 Environmental Justice Voter Guide in Spanish and English! 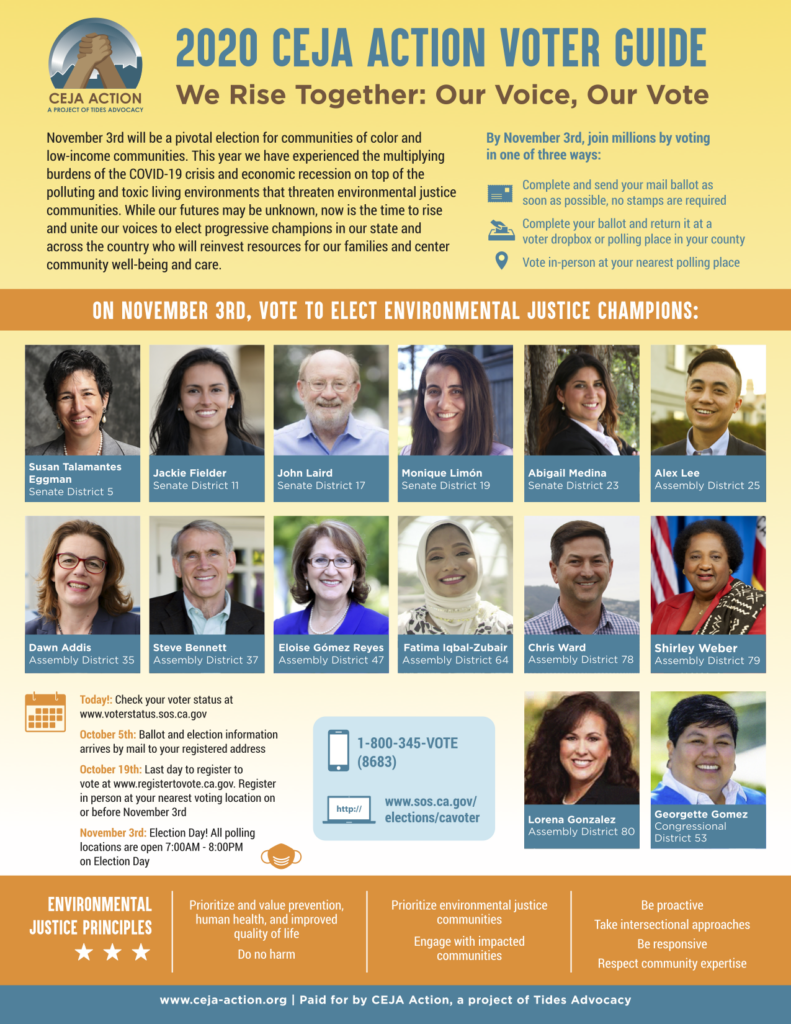 Who Did We Endorse?

Our slate of endorsements for the 2020 election are proven leaders who have advanced the principles of racial, social, environmental justice.

CEJA Action is proud to endorse the following candidates and critical ballot propositions:

Jackie Fielder (SD-11) – An educator and a community organizer who led the statewide coalition to pass AB 857 to create California’s first public bank to serve the needs of Californians rather than wealthy corporate shareholders. Fielder represents CEJA Action’s values, issues and commitment to build the political, social and economic power of EJ communities.

John Laird (SD-17) – Former Secretary of Natural Resources and Assemblymember representing California’s 27th District, encompassing Monterey, Santa Cruz and Santa Clara Counties. Throughout his career, Laird has advanced social justice issues from the environment to civil rights and he will be a voice for environmental action in the Senate.

Alex Lee (AD-25) – A self-identified Democrat Socialist who will lead on social justice and racial justice victories in the Bay Area and in Sacramento.

Dawn Addis (AD-35) – A Morro Bay City Council Member and multilingual educator who has united central coast communities on social justice issues, and who will prioritize protecting farmworkers and the most vulnerable communities from the climate crisis. Co-endorsed with CEJA Action’s alliance member, CAUSE Action Fund.

Steve Bennett (AD-37) – Current Ventura County Supervisor, who worked in partnership with CAUSE to create and resource an English, Spanish, Mixteco trilingual Farmworker Resource Center to serve Central Coast’s most vulnerable farmworkers to navigate state and local agencies to protect their rights. Co-endorsed with CEJA Action’s alliance member, CAUSE.

Eloise Gómez Reyes (AD-47) – An EJ Champion in the Assembly who has led authoring and advancing environmental justice issues to the forefront with hands-on public support of community initiatives.

Chris Ward (AD-78) – San Diego City Council member and Metropolitan Transit System board member. As a trained environmental planner, he understands the importance of the California Environmental Quality Act as a process to ensure public participation and to protect future developments from toxic exposure.

NO on Proposition 14 – Stem Cell Research Bond
A no vote will not authorize the sale of $5.5 billion in state bonds to continue stem cell research and development of medical treatments

YES on Proposition 15: Schools and Communities First
A yes vote will close tax loopholes for wealthy polluters and oil corporations to raise at least $6.5 billion for our schools and to protect California’s most polluted neighborhoods

YES on Proposition 17: Voting Rights Restored for Persons on Parole
A yes vote includes returning citizens on parole to have a vote and voice in democracy

YES on Proposition 18: Voting Rights for 17-Year-Olds
A yes vote allows 17 year old citizens to vote in primary and special elections if they are 18 by November general election

NO on Proposition 19: Property Tax Transfers
A no vote prohibits wealthier Californians to transfer tax breaks to homes $1 million and greater

NO on Proposition 20: Criminal Sentencing, Parole, and DNA Collection
A no vote upholds voter-approved Proposition 47 and 57 to oppose harsh sentences and DNA collection for non-violent crimes and continue to invest in support services

YES on Proposition 21: Local Rent Control Initiative
A yes vote allow local governments to expand rent control and limit rent increase to no more than 15% after a vacancy

NO on Proposition 22: App-Based Drivers Regulations
A no vote upholds current law to extend employee labor and wage protections to Lyft, Uber and other rideshare drivers

NO on Proposition 24: Consumer Personal Information Initiative
A no vote prevents weakening existing consumer protection laws and protects the authority of the California Department of Justice to enforce digital privacy

NEUTRAL on Proposition 25: Replace Cash Bail with Risk Assessments
Allows voters to decide if California will replace current cash bail with a new system without a standardized risk assessment and creates a pretrial oversight division under the authority of Probation Departments

Each of our endorsements is driven by the candidate’s commitment to our guiding principles. As we deepen our work and attempt to set clearer expectations from California elected officials, we will use 2020 to increase transparency about these principles. By advocating for these values, and endorsing candidates with a commitment to putting them into practice, we can build a more environmentally just California. They are: