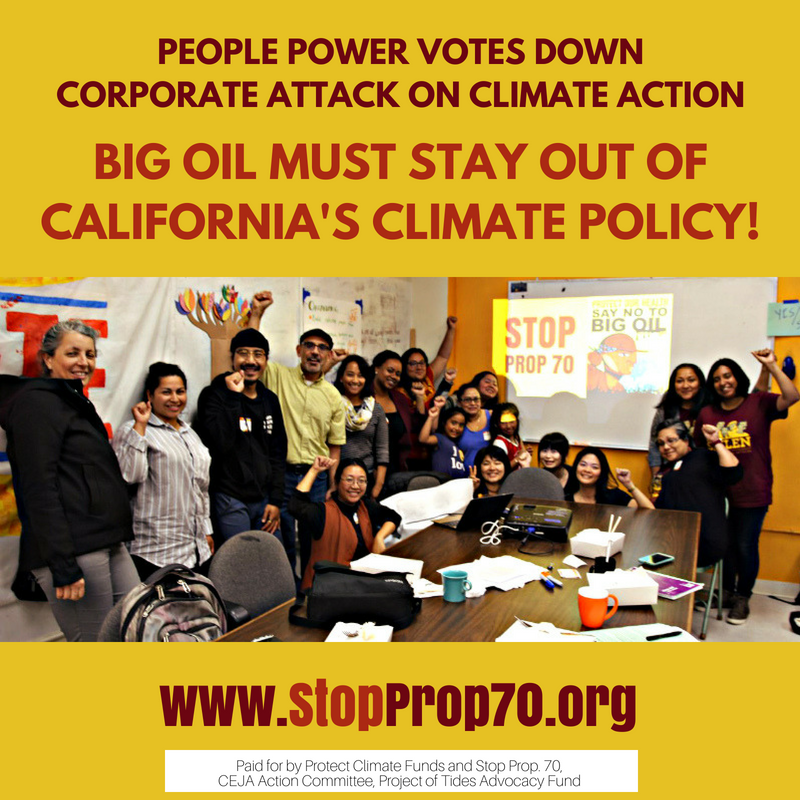 Oakland, CA —  As the climate crisis worsens, California needs bold, transformative action and real climate leadership that will not bow to industry pressure to enact ineffective climate policies. The defeat of Proposition 70 during the June 5th primary election sends a strong message to decision makers that they cannot continue to pass watered down, poorly conceived policies negotiated with the Big Oil industry. Proposition 70 would have undermined climate investments that are improving health, cleaning the air, and fighting climate change. By requiring a supermajority vote to approve climate spending starting 2024, it would have led to budget gridlock and increased the power of corporate interests in our climate policy.

The campaign to Stop Prop 70 was led by communities of color on the frontlines of pollution and united community groups, environmental organizations, and labor unions against Big Oil, corporate lobbyists, and compromising politicians who are blocking the bold climate progress California needs. CEJA Action and our members celebrate this win for California, the health of our communities, and for climate justice.

“Our defeat of Proposition 70 shows that communities of color are leading the fight for health and sustainability by standing up to industry backed forces that tried to weaken climate action. We fought back against Big Oil and said NO to a political deal cut to benefit industry, and not meant to benefit Californians nor the climate. We have what Big Oil and corporate interests don’t: people power. We demonstrated through our voices and our votes that our communities cannot be ignored. CEJA Action, together with our members, are building the power to fight Big Oil and advance real solutions to the climate crisis, starting with our most overburdened communities. Our fight does not end after this vote. We will continue to fight to close corporate loopholes that lead to increased pollution in our communities. We will be in the streets on September 8th in San Francisco to mobilize for real climate leadership and community-led solutions.”

“Proposition 70’s defeat is California’s vote to keep Big Oil and corporate interests out of our state’s climate policy. In the Inland Valley, people are getting sick everyday from the toxicity of diesel emissions. We need funds to reduce our asthma, and fight pollution and climate change, all the while as we build affordable housing, create good local green jobs, and power our communities with renewable energy. The risk of losing these critical investments drove our members to act with urgency to mobilize their family, friends, and neighbors to defeat Proposition 70.”

“This was a win for the health of our communities and for climate justice. Environmental justice communities like Southeast Los Angeles, Wilmington, Richmond and East Oakland have spent decades organizing on the ground to advance real solutions to the climate crisis. Community leaders of CBE Action were instrumental in mobilizing their family and neighbors to vote no on Prop 70. They are fighting for the right to clean air, water and soil, and a future that isn’t jeopardized by business as usual fossil fuel infrastructure like expansion of freeways to make room for diesel trucks, oil drilling near their homes, refinery expansions, and other threats to public health from greenhouse gas emissions. We celebrate this momentous win and will keep fighting to ensure Big Oil and industrial polluters are held accountable.”

“The vote to defeat Proposition 70 sends a message that our communities will not stand for polluter-backed attacks at a time when the climate crisis is worsening and we need bold, transformative action. Many people in our state still breathe toxic air and childhood asthma rates are above the national average. Our communities fought back and won to protect the health of our communities.”

Communities of color demonstrated through our voices and votes that we cannot be ignored, and we are growing our political leadership for climate, health, and the future of California. California followed our lead and united together across party difference, class, age, gender and race to vote down this corporate-led attack on public funds to protect California against climate change and pollution.

There are tens of thousands of residents in communities of color who are taking action everyday to protect our health, the climate, and future generations. This victory shows that when we raise our voice collectively, millions of Californians are moved to take action at the ballot box to make a difference. The defeat of Proposition 70 shows that people power can hold Big Oil and our decision-makers accountable.

“This victory declares that Californians care about protecting our health and fighting climate change. In the aftermath of the devastating wildfires that swept across Ventura and Santa Barbara Counties, it’s clearer than ever that our most vulnerable community members are on the frontlines of growing disasters in a volatile climate, and are too often left behind. These same communities fought back to protect our public resources to address climate change. We will continue to say no to Big Oil trying to block our climate progress and efforts to bring cleaner air and good jobs to our communities.”

“Frontline communities in South Los Angeles lead the fight to defeat corporate attacks, like Proposition 70, everyday. On June 5th we said no to corporate interests who want to continue polluting our communities and compromising politicians who would block the bold climate progress we need. We demonstrated that we will not let our communities or California climate policy be held hostage by the power of polluters. Once again, communities of color living at the frontlines of climate change are fearlessly disrupting the status quo and are leading the way for all of California.”

California is still one of the top oil producing states in the country, and these drilling sites are located right next to homes and schools in communities of color across the state. Governor Brown has yet to take action to start California’s transition away from fossil fuels and ramp down California’s oil extraction and production. Cap and trade, the policy he brokered around the original Proposition 70 deal, is riddled with corporate loopholes that lead to increased pollution in our communities, and the oil industry continues to lobby at our regulatory agencies to make it even weaker.

This September, all eyes will turn to San Francisco for a week of climate mobilizations in the lead up to the Global Climate Action Summit. Communities of color living and working on the frontlines of the climate crisis will continue to rise against deceptive policies like Proposition 70 and push on a national stage for real community-led solutions to reduce pollution, protect our health, create equitable good green jobs, and build real climate leadership for California. CEJA Action and our members will be in the streets on September 8th for Rise for Climate, Jobs, and Justice to demand real climate leadership and solutions that put communities and the planet — not the Big Oil industry — first.