With many important elections in 2018, CEJA Action is working hard to ensure that environmental and climate justice issues are a key part of the debate. With the recent wildfires and droughts, severe hurricanes battering so many places across the country, and climate inaction and denial at the federal level, our movement must make it perfectly clear that it is time for a Governor who will make our state a true model of just, equitable climate policy. California must protect our most vulnerable communities — low-income communities of color that are most impacted by climate change and have the fewest resources to adapt — while creating the most aggressive policies in the nation to address the root causes of climate change.

CEJA Action was proud to co-host a Gubernatorial Forum in Los Angeles to hear from the 2018 candidates what their vision and top priorities are as Governor of California. We thank our co-hosts CBE Action, California League of Conservation Voters, and United Food and Commercial Workers for their partnership and opportunity to build across EJ, labor, and environmental sectors.

We wanted to know which of the 2018 candidates for Governor will stand for climate justice in 2019 and beyond and the forum affirmed what we already know: Real climate leadership must start with California’s most impacted communities.

To see inspiring stories of climate leadership across the state, check out our blog post here! 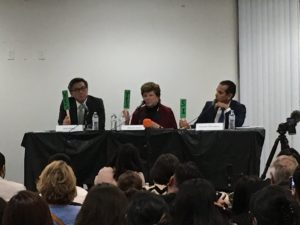 All candidates have to prove they are the environmental and climate justice leaders our planet and our communities desperately need right now. We need a leader that will embody a transformative approach to climate policy that leads the way for the country and the world in crafting an equitable, just transition off fossil fuels, while addressing the impacts of climate change and poor air quality that communities are struggling with right now.

We asked 2018 Gubernatorial Candidates John Chiang, Delaine Eastin, and Antonio Villaraigosa about environmental issues, ranging from their vision to meet California’s climate and clean energy goals, to if they would support the creation of clean energy jobs in our state’s changing economy. They also had the opportunity to respond to audience questions regarding issues impacting their communities in Southeast Los Angeles, such as the expansion of the 710 freeway and the clean-up and remediation of Exide, which will require more responsive leadership and a shift in business-as-usual operations of Big Oil and state agencies. The forum also included a lighting round where the candidates were asked to quickly respond to pressing environmental, climate, health and labor issues.

John Chiang was a vocal supporter of cleaner air for California and noted that our state must push forward aggressively on our 2030 climate goals. We were impressed by his responses on cutting transportation emissions. Delaine Eastin expressed many progressive positions, declaring environmental justice as her wheelhouse issue, and was the only candidate to support the repeal of the Costa Hawkins Act, which supports equitable housing regulations by ensuring that local governments can stabilize rental costs in rental units.

Antonio Villaraigosa raised his support of low-income neighborhoods, such as by allocating funding for green space in Wilmington as Mayor of Los Angeles. However, although Villaraigosa has a track record of passing clean energy policies in Los Angeles, in his response to a question on reaching California’s energy goals he stated that he doesn’t believe California currently has the technology to reach our 2030 targets – despite the fact that there is plenty of research to show that our state does indeed have the capacity to transition to 100% renewable energy.

While all three candidates said they would not take contributions from Big Oil and despite all the candidates pledging to reject oil money, it’s reported that Villaraigosa has already raised thousands of dollars this election cycle from oil interests.

During the lighting round, all three candidates held up yellow cards to provide explanations in response to the question on cap and trade. This has been a contentious debate in California’s climate policy that led to a sharp decline in scores in our 2017 Environmental Justice Scorecard. In 2018 and beyond, the stakes are higher. Decision-makers must rise to the challenge and show their commitment to environmental justice by standing strong on tough decisions, despite industry pressure. While each candidate gave tentative “yes” answers in response to whether cap and trade is the best way to reduce emissions, they were quick to point out the problem that the program allows facilities to continue polluting communities here in California. We are disappointed in their neutral responses and expected them to have a stronger analysis. 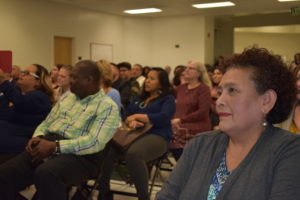 Here are a few reactions to the candidates from community members who attended the forum:

I appreciated the candidates coming to Huntington Park and answering our community questions… If one of them becomes our next Governor, you bet our communities will hold that person accountable to what they said and push them even further.” – Ivonne Correa, CBE Action, Huntington Park 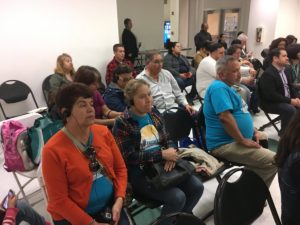 “My experience at the forum was that I at least heard two of the candidates promise to work with our communities and it was great to hear them make that promise in public. I want the next Governor to work on climate justice by focusing on the neighborhoods that have suffered the most from pollution. The Governor should make sure climate investments come into our neighborhoods. I want to see solar panels in my neighborhood.” – Carmina Martinez, Environmental Health and Justice Campaign, Logan Heights

We appreciate the candidates for coming to Southeast Los Angeles and engaging with the issues that are impacting the everyday health and quality of life of so many residents. It is clear that all three candidates who participated have more work to do to fully understand the scope of environmental health and justice issues facing Californians. We encourage them, and everyone, to read more about the vision and solutions from EJ communities across the state on a range of climate issues.

The 2018 elections will help determine whether we can pass bold and visionary policies in 2019, and we need it to be a bright spot against the xenophobic, climate denying tone that has captured so much of national politics right now. Communities of color can and should play a key role in shaping the outcomes of the elections here in California, and the Gubernatorial candidates must maintain committed to engaging, understanding, and championing the issues in communities of color.

CEJA Action will continue to educate candidates on environmental and climate justice, and look forward to seeing strong leadership from candidates. Ultimately, any candidates we endorse will have to demonstrate their ability to be EJ and climate champions for California.

Look out for CEJA Action’s endorsements of candidates and ballot initiatives in March and make sure that your voice is heard and your vote counts to elect a champion for environmental justice.

One thought on “Will California’s next Governor prioritize environmental justice?”